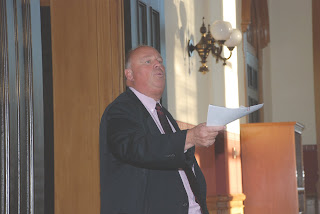 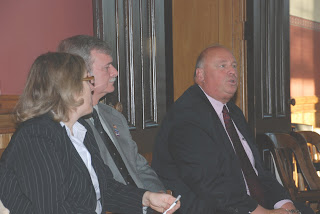 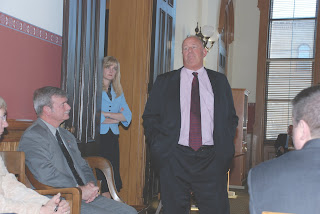 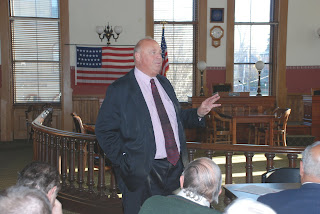 The New York Power Authority issued a fifteen-page document on April 22, 2009 that reveals their disgusting early plans to industrialize Lakes Ontario and Erie with offshore wind turbines. The document is called Request For Expressions of Interest (RFEI). (See http://www.nypa.gov/NYPAwindpower/GreatLakesWindRFEI.htm) The RFEI is the beginning of the whole offshore wind farm process and the document is soliciting a response from anyone having an interest in the offshore wind project and this would include foreigners. There are no offshore wind turbines anywhere in North America yet therefore it’s likely that the foreigners would prevail as they have “some” experience in offshore wind. NYPA President and CEO Richie Kessel is pictured postulating at the 11/13/09 Oswego, NY NYPA presentation.

Id like to see proof that the National Grid supports the NYPA offshore wind project. Ditto the NYSDEC. They may have interest but I need proof they support this ludicrous idea. And what statewide environmental organizations would possibly support this outrageous project – Id love to see the organizations named if they’re not from downstate and Long Island. Typical NYPA staff hyperbole!

Page 5 also says: “While it is understood that sources of renewable energy, such as a Great Lakes Offshore Wind Project, typically incur a price premium…”

If this isn’t the understatement of the whole RFEI document I don’t know what is.

Page 6 says: “it will seek to use the output of the Great Lakes Offshore Wind Project to meet the needs of upstate customers”

This statement is nothing more than a carrot dangled in front of upstaters in a weak effort to gain their support. What proof is there that upstate NY lacks sufficient energy? What is really going to happen is the electricity generated from this fiasco will be sent downstate to help metropolitan NYC and Long Island while Lakes Ontario and Erie get polluted in numerous nauseating ways.

Page 6 says: “The anticipated project(s) would be located in New York State waters of Lake Erie and/or Lake Ontario and would be utility scale, i.e., at least 120 MW.”

Could anyone possibly believe it would take a billion dollars to build a 120MW offshore wind farm? In 1966 Rochester Gas & Electric finished their Ginna nuclear power plant on Lake Ontario for $75M and they just sold it to Constellation Energy for $420M and it occupies less than 500 acres and produces safe, dependable electric 100% of the time with no pollution at a fair price.

Page 7 says: “NYPA’s concept of a utility scale project suggests that the largest commercially available turbine may be required. As such, this RFEI requests information concerning the largest lake-based wind turbine that is currently available (or is expected to be available) on the market as well as the prospects and timing for larger turbines.”

This text says it all – make it as big, loud, visually objectionable and obnoxious as possible.

Page 7 says: “As the project will likely be located in water depths of at least 50 feet, the design and construction of the support structure and foundation are critical to a successful project. It is NYPA’s understanding that to date there have not been many wind projects installed at these depths.”

Why not let NYS be the guinea pig for this curious experiment? Lets see what a good upstate NY winter of hard ice, high winds and industrial strength waves do to these expensive lightening rods. BTW - the Oswego NYPA presentation said that offshore turbines would not be placed in water depths of 150 feet or greater – lets not get too far from shore or people’s homes and valuable property!

Page 8 says: “…..the need for an offshore substation;”

Page 12 says: “The installation of the wind turbines will likely have impacts for local communities. Key to the success of the project is local community acceptance. Therefore, the RFP will require respondents to describe their plans for educating the affected communities on the benefits of wind energy. While NYPA intends to publicly support the project and will endeavor to arrange for meetings between the developer and key constituencies and local, state and federal officials, it will ultimately be the developer’s responsibility to address community issues.”

The first sentence is another gross understatement. Local community acceptance of an offshore wind farm is as likely as accepting a toothache. And then for NYPA to have the nerve to slough off to the wind farm developer - the responsibility to face a hostile community! But then – when there’s this amount of money in it for them – any greedy developer will make a weak attempt to satiate the community before ultimately giving up. Maybe the NYPA has experience putting lipstick on a pig?

Page 13 says: “The Great Lakes Offshore Wind Project would be expected to contribute substantial environmental benefits to the region, but could also have certain environmental impacts at the project site.”

Another understatement – Id like to see a substantial list of environmental benefits an offshore wind farm can produce. If you believe this statement you must believe in the tooth fairy. Id also like to see the NYPA list of certain environmental impacts at the project site – could they be heinous by chance?

Page 14 says: “Freedom of Information Law - Responders to this RFEI are cautioned to clearly label as “proprietary” and “confidential” any specific information or other material that responders consider to be confidential. NYPA is subject to the New York State Freedom of Information Law (“FOIL”) which provides, as a general rule, that NYPA records are accessible to the public, subject only to exceptions enumerated in FOIL which include, but are not limited to, an exception protecting trade secrets. After receipt of a FOIL request for information provided by a responder to this RFEI, NYPA, to the fullest extent permitted by FOIL, would seek to protect the information submitted by the RFEI responder that is marked “confidential” and “proprietary”.

This statement reeks of NYPA President Richie Kessel, his style and his apparent disdain for the NYS FOIL Law. What this statement is meant to do is to encourage developers answering the NYPA’s RFEI to label their replies "proprietary" or "confidential" specifically to trump New York’s FOIL law and prevent offshore wind skeptics & opponents from seeing who replied to the RFEI and learning their ideas and proposals that will outrage the affected public. Keeping this RFEI information “secret” and out of the hands of the general public to avoid the hue and cry of those opposed – apparently is the normal modus operandi of the NYPA. The NYPA has a known history of stonewalling FOIL requests. As a matter of fact – NYPA has its own regulations about making FOIL requests and has a section regarding FOIL on their website [NYPA regulations (21 NYCRR Part 453)]. Do NYPA FOIL regulations trump NYS FOIL regulations? Nothing transparent about how the NYPA does business – this is Richie Kessel. He’s the big boy in charge.

Well - you've had a brief review of Richie Kessel's document to peddle Lakes Ontario and Erie, probably to foreigners. If you don't take action opposing NYPA's plans then you must suffer the consequences.

Please see other blog entries on this site about the NYPA proposal to despoil the Great Lakes. Check out the 2 NYPA maps (on the 11/15/09 blog) shown at the 11/13/09 Oswego, NY presentation showing potential turbine locations of NYPA’s proposed offshore wind farms. Do you live or travel and enjoy the lakes near these locations? Savor what the lakes’ benefits have brought you as they may soon disappear forever.