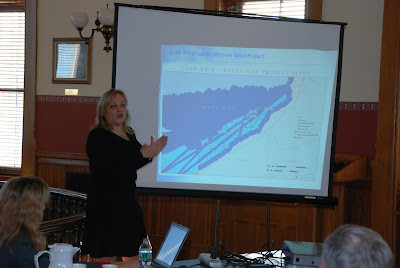 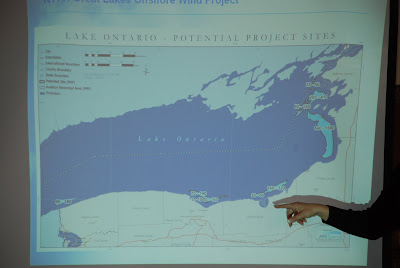 Lakes Ontario and Erie to be Decimated
NYPA Proposes Over 1,000 Turbines in Lake Ontario, 1200 in Lake Erie
Nov 13, 2009 – New York Power Authority President Richie Kessel and his staff made an hour and a half presentation at Oswego, NY city hall today to reveal the New York Power Authority Great Lakes Power Project that divulges a horrible future for Lakes Ontario and Erie. Approximately 60-70 people
attended the presentation. The presentation was originally supposed to be for elected officials and community leaders until word of this covert meeting leaked out and spread rapidly. Information was mostly presented by two of Kessel’s staff (Sharon Laudisi, government and community affairs specialist for NYPA and Kathleen (?), environmental specialist) who are convinced that wind energy would be terrific for the Great Lakes and upstate NY. The information given is a regurgitation of what Kessel presented on Earth Day, April 22, 2009 in Buffalo. Luadisi said that Buffalo wanted a wind farm and people supposedly asked the NYPA that the turbines be located closer to Buffalo. At Oswego there were several people who expressed an opposing view to NYPA’s plans and made their feelings known. Several slides were shown that gave the attendees an overall idea of “the project” and how abhorrent it is for New Yorkers. I came away from the presentation convinced that “the project” is being forced upon Upstaters by a downstate Long Island Democrat appointed by a grossly unpopular NY governor we didn’t even elect. Kessel wishes to pollute Lakes Ontario and Erie with thousands of wind turbines so that volatile, low quality, unreliable, expensive power could be sent to metropolitan NYC and LI. Kessel speculated that turbines and necessary related parts could be manufactured upstate creating thousands of jobs. The presentation mentioned that the project would be reviewed by NYSDEC, US Coast Guard, US Army Corp of Engineers and US Fish & Wildlife Service and others. However – the slides shown that identified what agencies would be involved in siting “the project” - didn’t include input from local municipalities along the shorelines. In other words – towns bordering the lakes with offshore turbines – the major victims of this horrible project - wouldn’t have much, if anything, to say about the project. This project would be forced upon them. Turbines would need to be located in water depths of less than 150 feet. Whether or not tax payments to those municipalities nearest “the project” would be made are also questionable. Yes – this is what Richie has in store for upstaters.

The Lake Ontario & Erie maps illustrate what NYPA’s Kessel has been hiding from upstate New Yorkers – maps that are a “first cut” - showing the potential project sites (offshore wind farms) of this massive project that will hurt so many New Yorkers in numerous ways. The map slides were shown at Oswego this afternoon and graphically illustrate potential offshore wind farms very close to the shoreline. On the map slides please note there are two numbers shown for each offshore wind farm. The numbers indicate the electrical generating capacity of the farm. For example, let’s look at the one for Lake Ontario & Niagara County. The numbers show 90-180 meaning the megawatt capacity range being considered for the wind farm. Each turbine according to NYPA will produce about 3 megawatts therefore to determine how many turbines might be in the farm simply divide the megawatt range numbers on the map slide by 3. Therefore – offshore in Niagara County you could expect to find between 30 to 60 turbines! Up to 60 turbines near the outlet of the Niagara River into Lake Ontario off Niagara County! This should really upset the owner’s of beautiful yachts in the Niagara River marinas as well as our Canadian neighbors who will be forced to look upon these 450’ high eyesores. The next Lake Ontario area victimized is Monroe County (Rochester & 103 offshore turbines) from the town of Parma then east to Greece, then past Irondequoit and Webster to Wayne County’s town of Ontario – this comprises 3 wind farms. Another offshore wind farm (20 turbines) is shown off the town of Williamson and then east and north of Sodus Bay – this should really cause chaos for the Sodus Bay boaters & fishermen. Another large offshore wind farm (106 turbines) continues north of Sodus Bay and east past the towns of Huron and Wolcott and just reaching north of Cayuga County and the town of Sterling. The next offshore wind farm is enormous (560 turbines) and located in Mexico Bay just off of Oswego and Jefferson counties. Two more offshore wind farms (53 and 136 turbines) show in Lake Ontario just north of Galloo Island and of course this is in addition to what’s already in the controversial works on Galloo Island and the Jefferson county mainland! The last offshore wind farm (16 turbines) shows off Grenadier Island and just inside the Canadian border.

Lakes Ontario/Erie would change forever if this happens!

If you do not want this tragedy to happen you must send this email to warn your neighbors, businesses, boating friends, charter captains, fellow workers, cottage owners, neighborhood associations, environmental groups, realtors, our Canadian neighbors, and especially shoreline property and business owners. You must pressure your local and state elected representatives to take immediate action opposed to Kessel’s objectives to industrialize the Great Lakes for downstate’s benefit. There is no need for offshore wind farms in Lake Ontario or Lake Erie. Don’t be fooled and allow Richie and NYPA to rape upstate NY.

Is it any wonder why New York state suffered the largest loss of residents to other states in the nation from 2000 to 2008, with more than 1.5 million people leaving, a report found. The report, commissioned by the conservative Empire Center for New York State Policy, found 8 percent of New York’s population at the start of the decade has left to other states. Efforts like Kessel’s trashing of Lakes Erie and Ontario will lead to a greater exodus of people from NYS during the next decade. Kessel has truly put a curse on lakeshore upstaters. Allowing any wind turbines anywhere in the Great Lakes will encourage more to follow in the future.
Kessel’s Great Lakes Power Project plan must be fought with a vengeance.
The New York Post said this about Kessel possibly being selected as NYPA chief:
"There couldn't be a worse choice to run the New York Power Authority than long-time Long Island gadfly and political gofer Richie Kessel -- yet Gov. Paterson seems set to tap him for just that post.
"What a huge mistake."
Paterson gave him the job.


Richard Kessel is the mastermind behind this Great Lakes Power Project fiasco and not free of controversy. You do not have to Google very long to discover what a train wreck Kessel is. He was fired from the Long Island Power Authority by former Gov. Spitzer. (both downstate Democrats) NY Times.com reports Kessel was investigated by the state inspector general for accepting dual salaries at LIPA for his twin roles as chairman and president. His plan for a 150 turbine offshore Long Island wind farm was dropped when costs ballooned to $800M and residents complained it was too near shore. He’s proposed putting a major power line under the NYS thruway (to downstate, of course). NYS Sen. George Maziarz of Niagara County testified that Kessel is a liar and a cheat. The North Country Gazette reported numerous Kessel blunders while he headed the LIPA. But the most damning Kessel commentary is described by George J. Marlin, former executive director of the Port Authority of New York and New Jersey. Read Marlin’s extensive Kessel scorchers in several articles at http://streetcornerconservative.com and at http://libn.com/thedebateroom/2009/02/13/marlin-kessel-to-blame-for-the-power-authority’s-woes - you won’t believe it!

No doubt Gov. Paterson won’t be re-elected hence Kessel won’t enjoy his NYPA job too long either but he’ll continue to do damage to NYS until he’s replaced from his $240K/year patronage job.

See another Beware NY Wind blog on offshore turbines: “Say “NO” to Offshore Great Lakes Turbines”
Posted by The Announcer at 3:19 PM