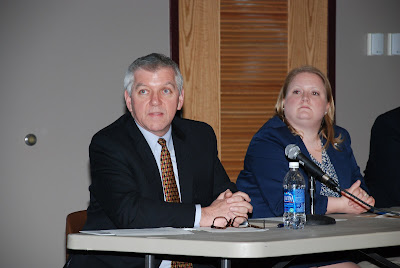 Many COAX members attended the forum held Thursday (3/8/12) at Jefferson Community College (JCC) in Watertown, NY. Power NY Act of 2011 & Art. X co-author, Assemblyman Kevin Cahill was there to defend this law while area Assemblywoman Addie Russell took the position opposing the law – both are Democrats. A good-sized crowd of about 100 people also attended and the meeting was video taped as well by Steve Weed Productions. The forum was hosted by JCC’s Dr. Ray Petersen – an expert on NYS energy.

COAX provided 2-sided color flyers that were passed out to all who attended – flyers critical of the Power NY Act of 2011 & Art. X emphasizing the loss of municipal home rule.

Cahill spoke before Russell and I was shocked that not once did he mention “home rule” during his initial comments. He did say he thought Addie Russell’s main complaint about the Power NY Act would be the Art. X reduction of the power threshold from 80 mgw to 25 mgw. Cahill also admitted he and other Kingston, NY residents fought a garbage to energy plant proposed for his area years ago that would burn waste – does that make him a NIMBY? A hypocrite?

Cahill also confused others and myself in the room when he alluded to the siting board possibly containing more than 7 members, that local governments under the new law have significant representation on the board, saying that if a power plant was proposed within a village that the village and town and county gets to appoint representatives on the board and that the state legislature gets to appoint people on the board. I do not know how he could have this issue mixed up as the law Gov. Cuomo signed clearly says 7 board members.

Assemblywoman Addie Russell followed Cahill’s comments and her second sentence was on point: “And, Kevin was right when really one of the major concerns I had and the reason why I voted against this piece of legislation was the reduction in the megawatt threshold because the reduction in the megawatt threshold resulted in the loss of local control.” Yes… loss of local control, municipal home rule, is the crux of the matter at hand and Russell understands this.

In my opinion you must believe in the tooth fairy to accept Russell’s above comment. As soon as the Governor signed the Power NY Act into law – the legislature was out of the picture. Russell is only kidding herself to think that wind developers would be intimidated by the Power NY Act and avoid the beautiful Cape Vincent – Thousands Islands region. If she thinks the law will prohibit wind development she’s wrong. The developers are hoping the Power NY Act and the unelected siting board will force wind factories into this area against the will of the town’s officials and state legislators will NOT be part of the decision process. Time will tell the outcome but you can predict the first victim will likely be an rural upstate community that could ill afford litigation to prevent their town from being raped.

Im sure most people attended the forum for the opportunity of a question and answer (Q & A) period that followed the speakers formal comments. During the Q & A I asked Cahill about his reference to having more than 7 persons on the siting board and he back-pedaled in my opinion from what he previously said. I believe he was unsure about his answer but he did indicate that ad hoc board members would have the right to vote on a power plant site.

Also during the Q & A - A woman spectator kind of yelled out that the Latin “ad hoc” meant “no vote”. I checked this out later and this is NOT true and if I knew who she was Id call her to correct her. Per Wikipedia: Ad hoc is a Latin phrase meaning "for this". It generally signifies a solution designed for a specific problem or task, non-generalizable, and not intended to be able to be adapted to other purposes. Per Law.com: ad hoc adj. Latin shorthand meaning "for this purpose only."

As most of you know I’ve been trying to get an answer from Cahill for months on the ad hoc member voting matter and where in the Art. X text it says ad hoc board members have or have not the opportunity to vote on siting the electric plant and he has steadfastly refused to answer me. My own assemblyman has also refuse to answer me on this. I also requested an answer from Assemblyman Speaker Sheldon Silver – never expecting he would answer me. But he DID answer my 2 simple questions in a letter I received the day after the JCC forum. Here is the key text of Assemblyman Sheldon Silver’s typed reply to me: “Although the law does not explicitly state that members vote on a final decision, it as envisioned that ad hoc members vote on the siting of a facility, just as they had under the previous law, which expired in 2003.” Now - having Assembly Speaker Silver’s reply - do you feel my question is adequately answered and that you are convinced that ad hoc siting board members will have 2 of 7 votes on the siting of a power plant when a vote is taken? I am not convinced they will have a siting vote!

In any case, at the JCC forum Cahill was asked about the siting board and two ad hoc board members and here is his reply:

This answer brings confusion and does NOT jibe with what is now sign law as the law clearly states 7 board members including ad hocs. The editor of the Jefferson’s Leaning Left blog site wrote this:

I then asked Assemblyman Kevin Cahill if the locally appointed members of the Article X siting boards were voting members. He (Cahill) said yes.

Well…….. this is only partly true – if you read the law there are clearly several issues to be voted on by the siting board that the ad hoc members are exempt from voting on. Despite the questions asked by these 2 attendees – my two questions were still not answered and they were (1) will ad hoc board members actually have a vote on the siting of a power plant? And (2) where does it say in the Art. X text that they do or don’t have the opportunity to vote on the siting of a power plant? I managed to put them directly to Cahill and actually received an answer – “It is my understanding that they do have a vote.” On question #2 – he said he could not answer because he didn’t have the text of the bill with him.

During the Q & A Cahill also said this:

What I started to see, particularly when it came to wind, was that promoters of wind development across New York state were town-shopping; they were municipality-shopping. And we saw a number of examples where town governments, in my view, were corrupted by wind developers.

I surely agree with this! Why did Cuomo, as attorney general, invent the Code of Ethics specifically for NYS wind developers to sign and agree to? Its because they are corrupt! What other businesses operating in NYS have you ever heard of that signed a Code of Ethics to behave?

Cahill said: “Something that deserves as much of your attention as Article X is the Governor's proposal for an energy highway. The energy highway proposal will make it so energy can be moved from one part of the state to the other.” Now read between the lines here – what Cahill’s really saying is that wind factories and all their related consequences will be located upstate while their small amount of power will be shipped downstate. Upstate will be victimized as usual and should not welcome the “energy highway” because this would certainly involve more litigation as a result of eminent domain court actions involving unwanted power lines beginning at the turbines. And because of the loss of home rule – it will be difficult if not impossible to stop the siting process.

In the Q & A Cahill also mentioned that in the USA it would be possible for 7 carefully placed bullets to take out our entire USA power system. Both Cahill and Russell expressed surprise at how the passage of the Power NY Act and Art. X took place but if you again read between the lines – quick passage of the law was done at the behest of the Governor – the one who embraces transparency and ethics.

After the meeting was over someone wondered how Cahill could arrive at this forum without a full copy of the Power NY Act (and Art. X) with him?

Dr. Ray Petersen saved his last power point slide for the end of the forum after all comments had been made. Part of his opinion should be mandatory for Art. X but likely won’t be. Petersen indicated

Im surprised Dr. Petersen’s recommendations didn’t mention to home rule – that was a big one to miss. The NYISO (Independent System Operator) has also said repeatedly that new power plants should be located where the power is needed. Cahill and the Governor are quick to dismiss this compelling recommendation.

Make no mistake about Assemblyman Kevin Cahill – Cahill is a turbine hugging wind charlatan. He’ll welcome a wind factory in your neighborhood and could care less about the value of your property declining, the noise impact generated by the turbines and how it affects your health, and how the dozens of other insurmountable issues these subsidy sucking monstrosities infect the community and quality of life.

Posted by The Announcer at 5:51 PM