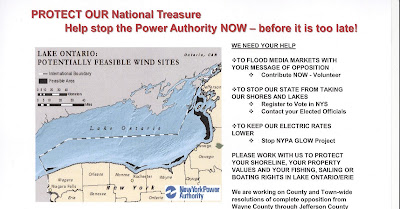 The Wayne Co. Board of Supervisors will HOLD A PUBLIC HEARING and vote on March 31, 2010 on whether to support an effort by the New York Power Authority to industrialize and ruin Lakes Ontario and Erie by promoting offshore wind turbines in the Great Lakes. You have a chance to speak against this outrageous plan by attending their meeting at 7 pm in the Wayne county courthouse in Lyons, NY, speaking out AGAINST offshore wind and letting the supervisors know this plan is bad for Wayne County as they are planning to vote on this issue at their March 31st meeting. There is considerable other offshore info on this blog site - search for NYPA and offshore articles. The map photos with this article show the potential locations in Lake Ontario that are being shown by NYPA to wind development companies world-wide trying to attract them to develop these wind farms. Dark areas in the lake 2.3 miles off shore are the potential locations but NYPA says the turbine location could be anywhere in NYS waters. DON'T LET THE DOWNSTATE NYPA PANDERERS FOOL YOU WHILE THEY TRASH LAKES ONTARIO AND ERIE!!!!! Jefferson and Oswego Counties have already said NO to NYPA earlier this month. There is nothing in this plan that does any good for Wayne County. Allowing just one of these turbines would create a domino effect and before long there would be thousands in our beautiful lake for the rest of our lives. Governor Paterson also heavily backs NYPA in this disaster - what does that tell you! When NYPA tells you this project will bring thousands of jobs and reduce America's dependence on mid-east oil they are LIARS.
Posted by The Announcer at 5:40 PM